In future blog posts my content will mostly focus on the fields of logo design, advertising and graphic design. But today I want to share a personal journey I have been on these last 4 months. This last Sunday I ran in the Oklahoma City Memorial Marathon. It was an experience that I will never forget. It changed me. When I began training for the half marathon this last January, the goal was simple. Complete the half marathon on April 29th, 4 days after my 40th birthday. At first it was a mission to defy that landmark birthday. As my training took me on longer runs, my knees and legs began to ache unlike anything before. But I pushed through and the struggle became less and less. When the distance extended into the 8 mile and further distances I began to relate the similarities to this training with life in general. You have a lot of time to reflect during these long runs. Growing up most of us acquire many life lessons from whatever sport or hobby consumes us. This half marathon training was no different. I’ve always been one to charge full throttle into a project or the task at hand. When you go to run a distance of 13.2 miles, that does not work. After a month or two of training I began to realize that the key to this challenge was simple. Pace yourself. This was something very hard to attain at first. Once I learned to pace myself at six miles per hour, things began to fall into place. Eventually I was able to run at a pace of 6.5 miles per hour and I felt as if though I could run forever at this pace and never become out of breath. But the pain in the muscles was always there on those longer distance running days. My goal when I made this commitment was to simply finish the half marathon. Eight yeas ago as I visited with my uncle Wayne during a thanksgiving visit I told him I was going to run a marathon one day. I could tell by his expression that he thought I was pulling his leg. I would like to dedicate my run in his name, Wayne Roney, who was a great man whom cancer had taken from us too early.

Sunday, April 29th I made it downtown to the OKC Bombing Memorial an hour early at 5:30 am. It was still pitch dark. There were droves of runners. 24,000 runners all amped up just like me ready to go. The scene was something I will never forget, amongst the 168 lit up chairs, symbolic of those who tragically died. There was a great deal of energy in the air. 15 minutes prior to the race there was 168 seconds of silence that brought the huge crowd to a solid silence. With the exception of all the helicopters flying above. There was also an additional 3 seconds of silence in memory of those taken earlier this month at the Boston Marathon. Minutes prior to the race, the morning light began to shine. With the morning light the crowds and thousands of participants became very real. The electricity that was felt in in the air was unexplainable. There are no words to describe this unseen feeling of electricity in the crowd of runners. 6:30 came quickly, and the race was off! The herd of runners slowly began to move ahead. It took much longer than I expected to even reach the starting line. Everyone was moving at a steady pace and all went smoother than I had imagined. All anxiety fell to the cement as I begun to run. Running through downtown OKC with so many others was something I could not have imagined. As we winded out of the downtown area and made the long stretch towards the great dome of the state capitol the scene was simply awesome. So many strangers along the way cheering the runners on. Some in gorilla costumes. Some wearing nothing but underwear and wigs. With words of encouragement painted on their bellies. Odd, but impossible not to make you laugh. As I settled into the race, I knew I would at least come close to my goal. That goal was to complete the race within 2 hours! 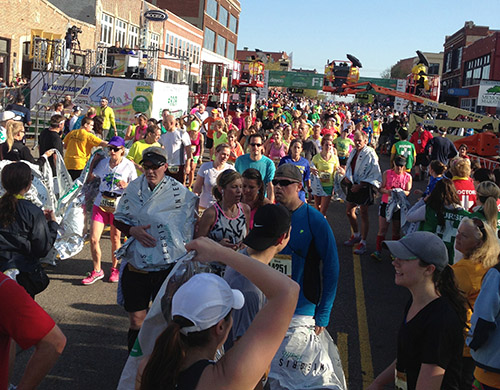 In the 13th mile I sprinted at a steady pace to cross the finish line with an abundant amount of energy left. I had completely shocked myself. I guess the nervous energy made this run different than my previous long distance training sessions. I felt pretty confident that I may have finished within two hours. Sincerely I would have been content to get close to the 2 hour mark though. Shortly after the race I checked my official race results and there was my official race time 2:00:00. Simply incredible! Right down to the split second. I had prayed the day before, asking for the strength to complete the race within 2 hours. I believe my prayer was answered. And that my friends was an experience that I will never forget. No doubt a RACE TO REMEMBER.

This site uses Akismet to reduce spam. Learn how your comment data is processed.